From kingfishers to kestrels and seals, the Beaulieu River is home to such a diverse range of wildlife that it’s very easy to forget that you’re in the heavily populated South of England.

The river and its surroundings form part of a Site of Special Scientific Interest which offers habitats for some 200 species of birdlife. We are an important feeding ground and lifeline for birds, with up to 125,000 wildfowl and wading birds visiting the Solent each winter, which is home to 10% of the world’s population of Dark bellied brent geese.

We welcome visitors, and encourage you to come back on a regular basis to see the ever changing kaleidoscope of wildlife as migrant visitors pass through, but please do help us protect our wildlife by following all signs and guidance. When they’re disturbed, birds waste energy escaping from the perceived threat and lose valuable feeding or resting time, which may mean they don’t survive to migration.

Disturbance often happens accidentally because the birds are so well camouflaged, so please help us by being aware of your surroundings. Remember dogs are not permitted access to the North Solent National Nature Reserve under any circumstances, and landing is only permitted at designated points upstream of the RSYC at Gins.

To apply for a permit, please contact the Beaulieu Estate Office (01590 614621/estate@beaulieu.co.uk)

A brief guide to the birds of the Beaulieu River

Ornithologist Graham Giddens shares with us eight birds which you’re likely to see at various times of year along the river and its banks.

Little Egret | All year round 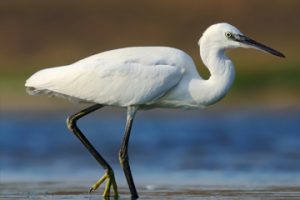 This small white heron only colonised the south coast in the late 1980’s. They are now common along the River and some breed nearby. They avoid competing with their larger relative the Grey Heron, by targeting smaller fish and prawns in the creeks and shallows of the estuary. Adults have black legs and bright yellow feet. In the breeding season they also sport fine plumes on the head, back and neck.

Black-headed Gull | All year round 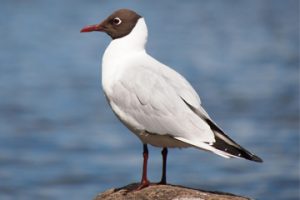 The most common small gull of the region. Many nest in colonies around the Solent, but we also find migrants here in winter from as far away as the Baltic. Their name is misleading; because never in the life of a “Black-headed” gull does it have a black head! Their heads are dark brown in summer and almost pure white in winter.

Peregrine Falcon | All year round 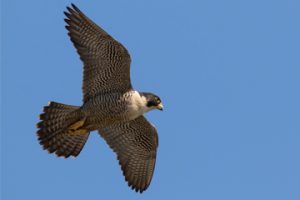 Their reputation for power in flight is justly deserved and all of the duck, waders and gulls on the River are well aware of the danger posed by a peregrine on the hunt. One or two peregrines often sit on posts or shingle banks bordering the estuary. Whilst at rest the smaller birds are content to feed but, as soon as a peregrine takes to the air, the other birds take flight in panic.

Redshank | All year round 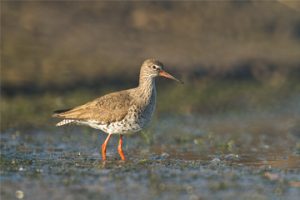 A medium-sized brown wader with orange-red legs and pale under parts. They search for worms along the tidal mud and wet margins. In winter large numbers of migrant redshank arrive from Scandinavia and Eastern Europe to winter alongside our resident birds. In spring the migrants leave us, whilst the resident redshank settle down to nest in protected reserves alongside the River. 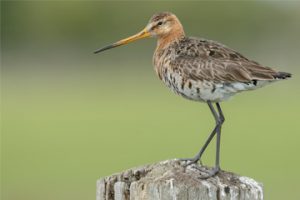 The results of many ringing studies have revealed that the black-tailed godwits that we commonly see along the River in winter, and throughout the Solent, have come from breeding grounds in Iceland. The godwits have long, straight bills, long dark legs and a greyish winter plumage. In spring, the adult males turn a beautiful chestnut-red on their heads, necks and backs, making them very recognisable. 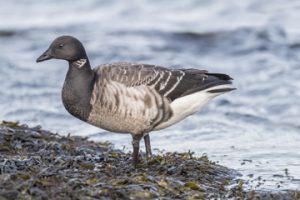 The brent geese that we see on the River spend their summers on breeding grounds at the top of Russia. Many of them winter in the Solent, often alongside the larger feral Canada geese. The Brent geese are smaller and darker than the Canadas. They graze grass in the fields and various weeds along the shore. In mid winter the River and its environs support close to 2000 of these attractive wild geese. 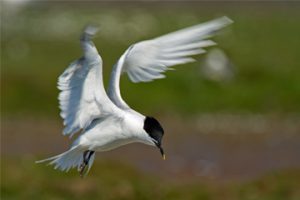 The Sandwich tern is named after the town in Kent, but is reasonably common all along the south coast. The Sandwich tern is one of three species of tern that stay to nest locally, the others being the common and the little. Of the three, the Sandwich is the largest with a black bill and a short, forked tail. They often stay on the River into late autumn, before flying to winter in West and Southern Africa. 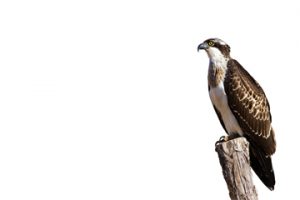 Ospreys are now breeding in good numbers in Scotland and therefore the River often hosts passage migrants from that population. Whilst on their way to winter grounds in West Africa, they stop off to feed on the grey mullet and flounder from the River. The osprey’s large size and habit of hovering over the River, make them easy to differentiate from the local buzzards, some of which can appear in pale plumages.

Places to stay
Explore by boat