Special guest, the most decorated Olympic sailor Sir Ben Ainslie swapped his race boat for a traditional scow to sail along the Beaulieu River to the 50th anniversary celebration of Buckler’s Hard Yacht Harbour after its £2m redevelopment. 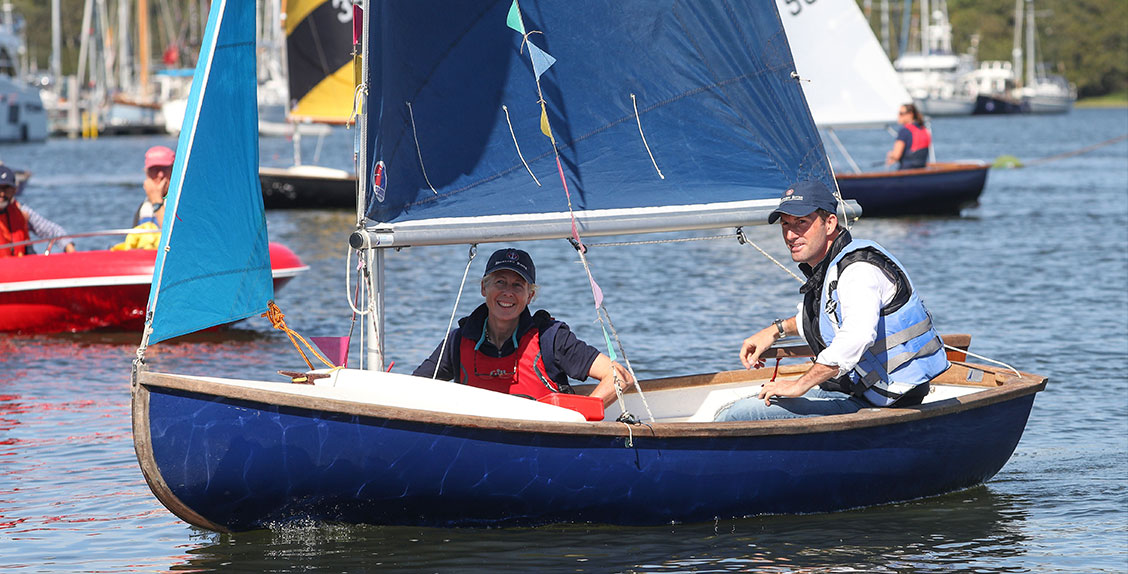 While the fleet continued with its race, Sir Ben was cheered on stage where he was presented with a certificate granting him the Honorary Freedom of the Beaulieu River by Lord Montagu. They were joined in the ceremony by round the world yachtsman Sir Chay Blyth CBE BEM, who was granted the ‘freedom of the river’ by Lord Montagu’s father at the original marina opening in 1971.

We were thrilled and indeed honoured to welcome Sir Ben Ainslie as our special guest to commemorate the completion of our rebuilt yacht harbour. With the recent Tokyo Games fresh in our minds, it is good to reflect that Sir Ben is the most successful sailor in Olympic history, winning medals at five consecutive Olympics from 1996. As a resident of the Isle of Wight, who will be sailing in the Solent, it occurred to me that safe harbouring in the Beaulieu River might occasionally be useful between races.

Sailing here with Mary just reminded me of what a wonderful sport sailing is and how lucky we are to be able to get out on the water in such beautiful surroundings as the Beaulieu River. I am not quite sure how we’d get on coming up the Beaulieu River in an America’s Cup 75 footer that does 50 knots of speed but one day we may give it a shout.

I enjoyed sailing with Mary, learning more about the Beaulieu River and Buckler’s Hard and being back in a small scow without the pressure of competing at speed. In years to come, I hope to have more time to use the ‘freedom of the river’ on the water here. It is a huge honour to have been given the ‘freedom of the river’ when the two previous sailors to be granted it were Sir Chay Blyth and Sir Francis Chichester.

A visit by a leading yachtsman really puts the seal of approval on any river offering new services to the sailing fraternity. And so it was in 1971 when Sir Chay Blyth came to open the Buckler’s Hard Yacht Harbour mark 1. In fact, Sir Chay had only recently completed his great voyage in 59-foot boat British Steel, making him the first person to sail single-handed, non-stop, westwards around the world. I know that he successfully took on many other challenges after that, little imagining that he would be here back 50 years later.

It is hard to believe that I came here 50 years ago as a young boy and have now returned as an old man. Nothing has changed really – it is still a fabulous place to come. It was a privilege to be asked to perform the original opening and I am glad that in my lifetime, the Beaulieu River has kept its charm and is as special today as it was during my first visit. I am proud to be part of these celebrations to mark such a major new milestone.

In a day of celebration (on Saturday 14th August), berth and mooring holders joined in with traditional regatta fun and games. Youngsters enjoyed a crabbing competition, while families competed in rowing and swimming challenges for prizes which were awarded later in the day. 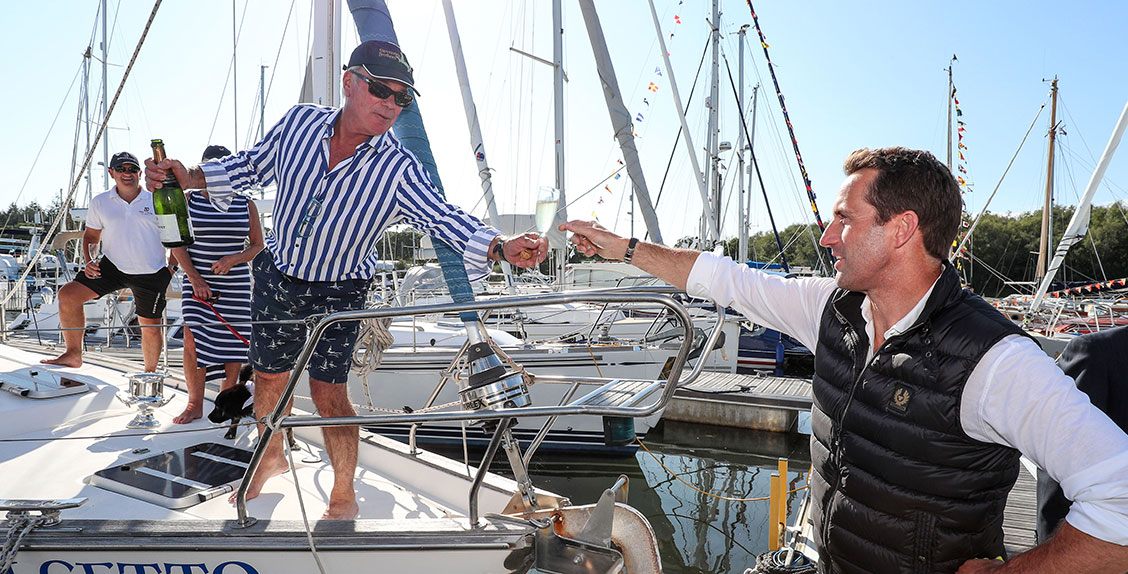 As Sir Ben judged helped to judge the best dressed boat competition, berth holders tried to bribe him with a glass of champagne and winner Kim Flury presented him with a Pirates of the Caribbean compass “in case he got lost and needed to find his way back to Beaulieu”. Many boats flew a limited edition golden anniversary burgee which was designed by mooring holder Philip Dyke for the celebrations. 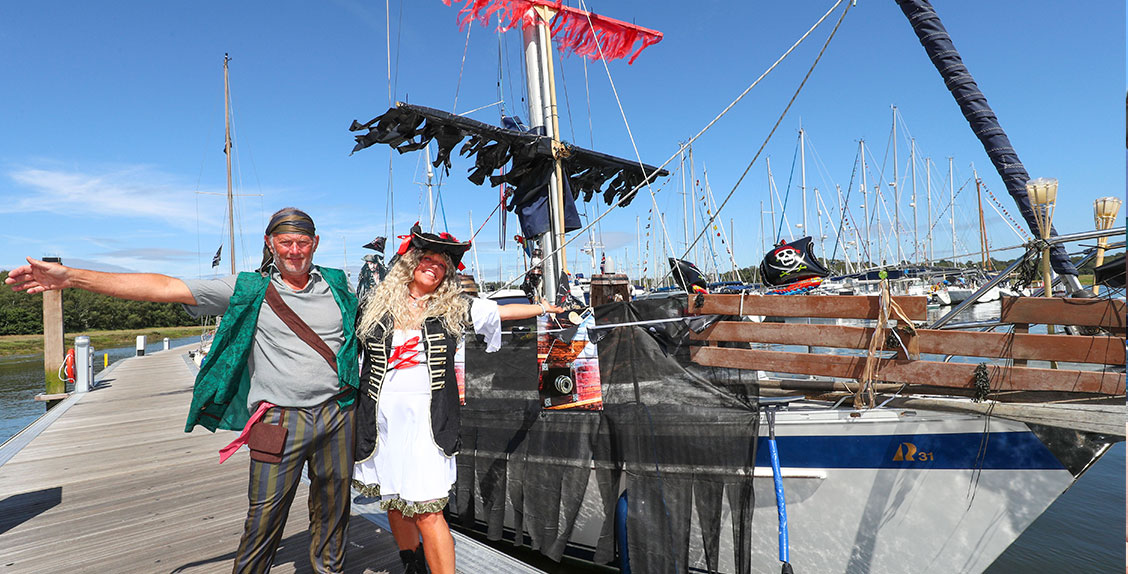 Despite coronavirus restrictions, the redevelopment of the yacht harbour was carried out over two winters with its completion providing 66 new marina berths, with larger berths to suit vessels up to 20m, upgraded electrical services, improved WiFi and a new dedicated visitor area. Specialist marina consultancy, Gosport-based Marina Projects managed the redevelopment, while the work was carried out by Fareham-based Walcon Marine – which undertook the original yacht harbour build 50 years ago. The Beaulieu Estate worked with agencies including Natural England and the Environment Agency to continue to protect the river’s unique habitats and species. 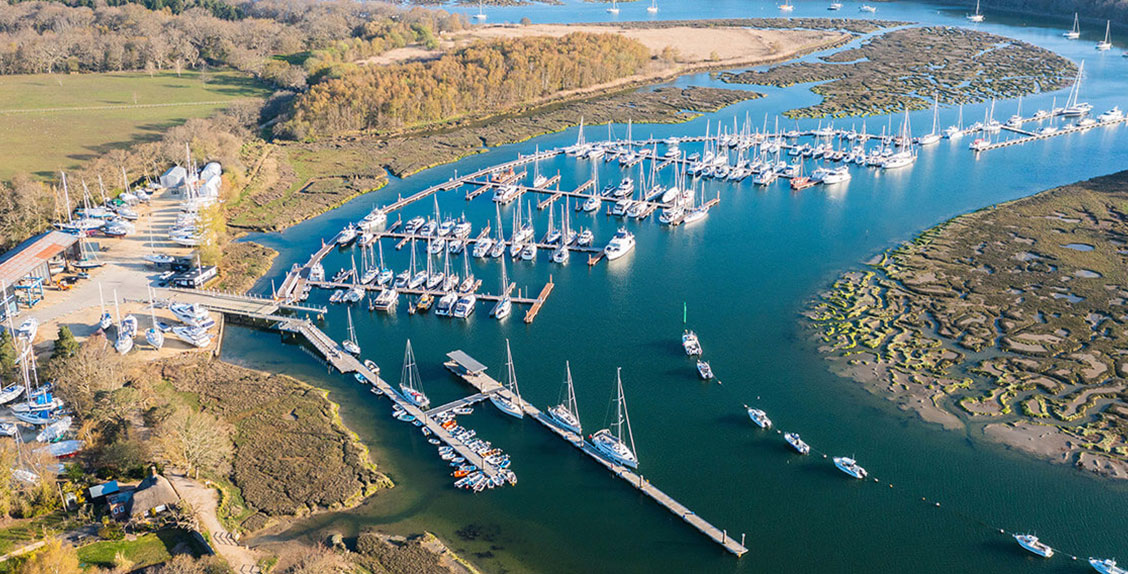 This investment is an important one in the river’s evolution, but it does not end here. With the water-based facilities now renewed, we will next be turning our attention to improved systems for the launching, lifting, moving and storage of boats. After that, we will be looking to upgrade our land-based facilities, the plans for which are already underway.

The Beaulieu River is one of the few privately owned rivers in the world and the custodianship of the Montagu family has protected it for over four centuries. The yacht harbour, which was named as The Yacht Harbour Association’s Coastal Marina of the Year (for under 250 berths) in 2018/19 and runner-up in The British Yachting Awards’ Marina of the Year awards in 2020, has a long track record of giving a personal and outstanding service to its customers.

For moorings and berths visit our annual berthing page, email harbour.office@beaulieu.co.uk or call 01590 616200.